The Caribbean is the second most hazard-prone region in the world, and has experienced repeated losses from hurricanes and associated wind, rain and storm surge damage. Climate change is now causing an increase in the frequency and force of severe weather events, creating more dangerous threats to the lives and livelihoods of the region's more than 43 million inhabitants. In 2017, an unprecedented series of no less than five major hurricanes devastated the region. This has been followed by at least one Category 5 hurricane every year since, including Hurricane Dorian in September 2019, which hit with sustained winds of 285 kilometres per hour. 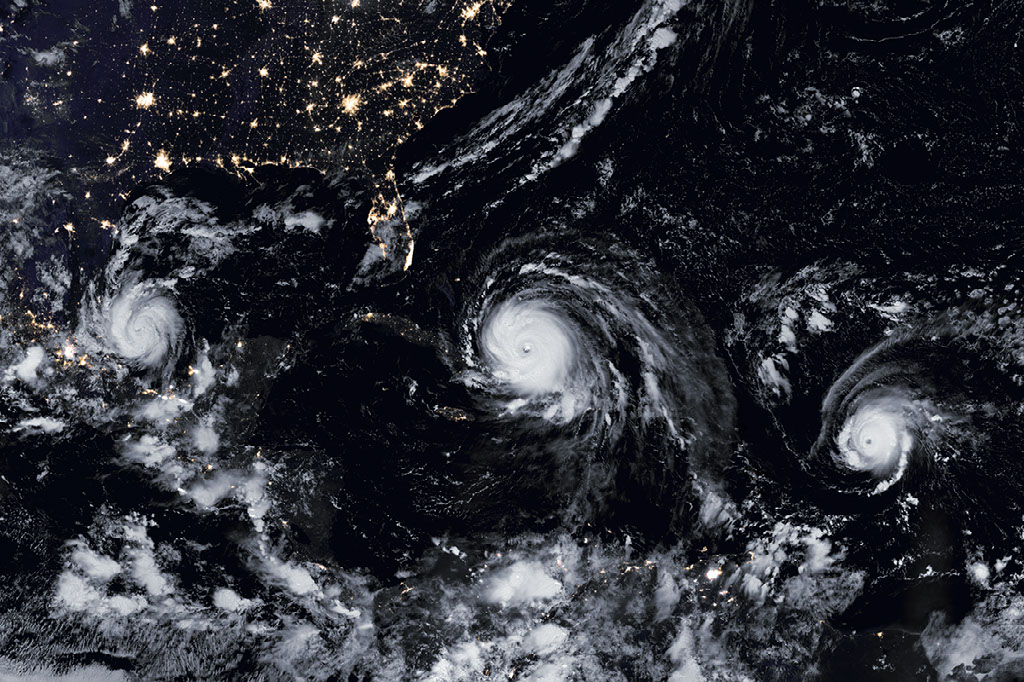 of the population across the Caribbean region lives within two miles of coastlines.

of economic activity in the Caribbean region is within two miles of coastlines.

in annual disaster losses occurs across the Caribbean region, with significant loss to social and productive sectors.

of disasters across the Caribbean region are related to hydrometeorological and climate related events*.

of casualties and economic losses across the Caribbean region caused by disasters, are related to hydrometeorological and climate related events*.

In response, government agencies across the Caribbean are working together – and with national, regional and international organizations – to strengthen severe weather event early warning systems and services.

As part of this effort, in 2018 the Climate Risk & Early Warning Systems (CREWS) initiative launched a US$ 5.5 million Caribbean regional project – with the technical support of its Implementing Partners WMO, World Bank/GFDRR and UNDRR, and in coordination with local and regional Caribbean authorities.

An important cross-cutting part of this work is focused on bridging the gender divide in access to early warning systems. This enables the process to consider the different groups, reach more people, specifically those most at risk, and further contribute to the concept of people-centred early warning systems. It also works to ensure that women are not excluded from contributing to, and benefiting from, this process.

In 2018, a regional assessment was carried out by WMO and the CREWS Secretariat of national early-warning systems during the 2017 Caribbean Hurricane Season was carried out. A key recommendation of the report was to expand the stakeholder base to incorporate Gender Bureaus in order to advance the inclusion of gender in early warning systems across the region.

Extreme events do not affect men and women, or boys and girls, equally. In fact, on average, natural hazards kill more women than men, and kill women at a younger age than men – and the stronger the disaster, the worse it gets.

In the Caribbean, women tend to be economically disadvantaged as compared to men. Unemployment rates of women are higher than that of men in most countries in the region, while women are more often than men to head a single income household, and earn lower wages. For example, in Haiti women earn 30 percent less than men. In both Haiti and the Dominican Republic, female-headed families represent 40% of households, reports the World Bank. As a result, women have increased vulnerability when a severe weather event occurs, and struggle more to recover post-event.

UN Women reports that environmental degradation and climate change have disproportionate impacts on women and children. Women often bear the brunt of coping with climate-related shocks and stresses, which add to their care burden. As land, forest and water resources are increasingly compromised, local communities and indigenous peoples, particularly women, whose livelihoods depend on them, are marginalized and displaced. And as per UN Women statistics, women are 14 times more likely than men to die, globally, during a disaster. (More information available from UN Women here).

Gender-responsiveness, therefore, is a gamechanger in early warning and climate resilience, especially in least developed countries and small island developing states. By understanding this, we can better target actions, reach the entire population with early warnings, and improve the results of early warning systems and climate action.

The early warning and climate resilience actions that do not explicitly consider gender are likely to increase mortality, marginalization and the poverty traps that already exist in the society.

Building Gender into the Pillars of an Effective Early Warning System

CREWS projects strive to be gender responsive, and consider the following questions related to the four pillars of an effective early warning system:

gender action across the caribbean

In 2019, CREWS Caribbean supported four consultation workshops on gender and vulnerable groups in early warning systems across the region, with the technical support of UNDRR in: St Lucia, St Vincent & the Grenadines, Dominica, Antigua and Barbuda, and St Maarten.

Through the national and regional consultation processes, countries identified a number of actions to bridge the gender gap in early warnings access.

These include actions that build political commitment, such as gender-responsive legislation and policies, which recognize that women are marginalized in many aspects of life, and ensures their participation in early warning systems.

These also include a call for strengthened coordination regionally among Caribbean nations, as well as nationally among the public and private sector agencies and organizations -- including gender bureaux. As part of this, regional standards and common alert protocols are identified by countries as necessary.

Additionally, increased technical support and training needs have been identified, including training by gender specialists; as well as sharing of best practices for gender-responsive early warning systems and services.

With the information generated through the rich consultative process carried out by UNDRR in partnership with national and regional government agencies and organizations, the Caribbean region is one step closer to closing the early warning systems gender gap.

In 2020, this work will continue to advance, building on the outputs of the consultative process, through anticipated pilot programmes.

Through this work, it is hoped that the more than 20 million women and girls across the Caribbean will come closer to benefiting from and contributing to the development of life-saving early warning systems.

Made possible through the generous support of these CREWS Members:

CREWS is a partner of and contributor to:

Your report has been submitted.

There was a problem submitting your report. Please contact Adobe Support.